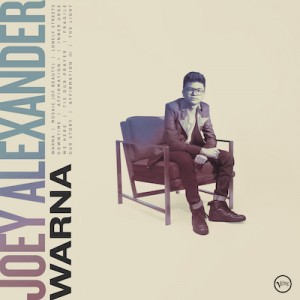 Pianist Joey Alexander’s fifth release since his auspicious 2014 debut as a bebopping child prodigy, Warna marks the 16-year-old’s development into adolescence. Now that the novelty that accompanies all prodigies is wearing off, listeners are presented with an album that seems poised to stand on its own artistic merits; it’s not just “pretty good for a kid.”

The pianist is at his best when flying across the keyboard on uptempo numbers—like the opening title track—or in his spirited run through the changes of Joe Henderson’s “Inner Urge,” where bassist Larry Grenadier and drummer Kendrick Scott are eager and potent collaborators. Alexander’s duet with percussionist Luisito Quintero, “Our Story,” also stands out. But most of the songs here gesture toward bouncy evocations of Ahmad Jamal or floating ballads and waltzes that land with less confidence. Alexander’s crisp touch and clever turns of phrase still are there, but he still seems to be finding his way through the feeling of subtler rhythmic forms; his melodramatic interpretations of ballads are a bit overwrought. But there are some fascinating moments throughout Warna, where Alexander seems to break through these veneers and into new spaces of interaction with his triomates, as on “Affirmation III.”

All told, Alexander’s effortless pianism always hits the right notes, even when a few wrong ones might do him some good. And although he’s still learning to connect to the emotional depths of the blues, his breezy, playful curiosity—evident throughout Warna—is deeply refreshing.