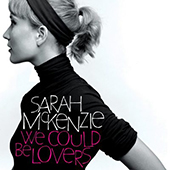 Sarah McKenzie interpreted songs by Irving Berlin, Duke Ellington and Johnny Mercer on her award-winning 2012 album, Close Your Eyes (ABC), and the singer-pianist continues in that vein onWe Could Be Lovers. The Australian-born, Boston-based McKenzie has a graceful piano touch, and her elegant vocal style is free of distracting curlicues. On her new album, vibraphonist Warren Wolf makes a dynamite contribution to the Ellington number “Love You Madly,” and Ingrid Jensen’s beautiful trumpet tone enhances the pep and pure fun of the original tune “Quoi, Quoi, Quoi.” The leader’s jaunty piano enlivens the swing element of Cole Porter’s “At Long Last Love,” and she makes clever artistic choices by extending vowel sounds in these lyrics: “Is it a cocktail, this feeling of joy?/ Or is what I feel the real McCoy?” Her charming version of Abbey Lincoln’s “The Music Is The Magic” features intelligent phrasing, plus a judicious use of scatting and handclaps to increase the fun factor. Wolf’s vibraphone is a brief but potent element in McKenzie’s version of “I Won’t Dance” (a tune that Frank Sinatra recorded, along with “At Long Last Love,” on his classic 1957 album A Swingin’ Affair!). Moving away from the keyboard, McKenzie and guitarist Hugh Stuckey perform a spare version of Mancini’s “Moon River,” proving that even the most shopworn standard can sound fresh in the hands of sensitive interpreters.