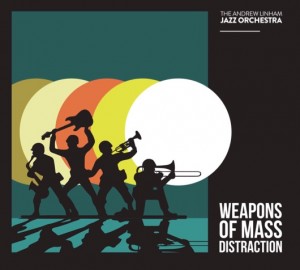 This 17-piece contemporary big band led by U.K.-based baritone saxophonist, composer and educator Andrew Linham is one of the boldest—and most eccentric—large jazz ensembles performing today. This is a group with chops and personality to spare, not to mention a madcap sense of humor. Performing Linham’s original compositions, the orchestra—which consists of key players on the U.K. scene—covers a huge stylistic ground that ranges from jaunty, old-fashioned big band swing to modern large-ensemble pyrotechnics to pop power ballads. They play with guts and attitude, and manage to inject outrageous humor into even the most demanding of musical passages, striking a perfect balance between the sublime and the ridiculous. Their debut album comes as a pleasant surprise, since previously I had heard of neither Linham (who plays regularly in numerous U.K. big bands) nor his orchestra, which the leader has described as “a loud visceral remedy of jazz-based insanity to warm the cockles of your heart.” It seems that this daring ensemble, which has been performing Linham’s tunes since 2014, flies low under the big band radar, performing mostly in England (including a well-received performance at the London Jazz Festival in 2015). The cleverly titled Weapons Of Mass Distraction firmly establishes the Andrew Linham Jazz Orchestra as a significant addition to today’s big band scene and a group that deserves wider recognition at the international level.