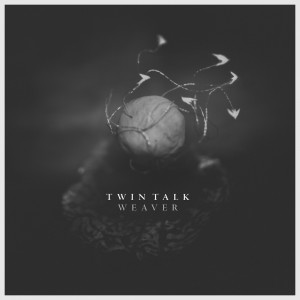 To appreciate the experimental nature of Weaver, the third album from Chicago’s Twin Talk, compare the short track “Miniature I” with its counterpart, “Miniature II.” You’ll hear the same disarming melody in two starkly contrasting arrangements. The first—the electric version—uses a drum track behind the vocals in unison with the saxophone, both reverb-laden, repeating the hook. The second—the acoustic version—uses hollowly ringing gankogui bells behind an upright bass and unadorned saxophone, also repeating the hook.

The trio—reedist Dustin Laurenzi, bassist/vocalist Katie Ernst and drummer Andrew Green—holed up in a recording studio in 2017 to explore the boundaries between improvised and composed music. The product is a 10-track album of nuanced phrases and subtle excitement. Laurenzi, a commanding improviser, wrote most of the pieces for the program. His ideas run the gamut from the unhurried, aptly named “Folks,” where Green leans into a slow, heavy backbeat, to the free and frenzied “Paxton,” which shifts abruptly into an ambling ballad midway through. Laurenzi’s use of repeated phrases, doubled melody lines and contained solos drives these pieces in a satisfyingly linear direction. Ernst’s wordless, straight-tone vocals, which hover around the tonal center of the tunes she sings, figure prominently on the album and contribute to the dramatic tension of the compositions. Ernst penned three of the tracks—the standout being “Human Woman” for its breathless, insistent vocalese and propulsive bass line. Powerful.