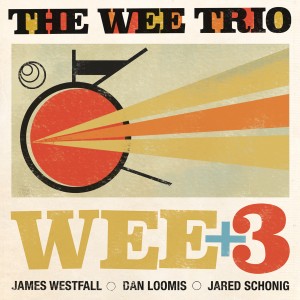 For its fifth album as a unit, The Wee
Trio—James Westfall (vibes), Dan
Loomis (bass) and Jared Schonig
(drums)—has chosen to double down. Literally. The group has
expanded twofold for this outing, recruiting colleagues Nicholas
Payton (trumpet), Nir Felder (guitar) and Fabian Almazan (piano) to appear as guest soloists on individual tracks. The result is a spirited, intellectually rigorous 11-piece program that reflects the diversity of the individuals involved while pointing to a shared aesthetic of lush grooves and winsome improvising.

The most engaging tracks on this disc work in dual mediums, mixing broad, watercolor ensemble play with pinpoint soloing and strong individual statements. “Rt3” begins in a mist of ambient sound, but then begins to crystallize around Felder’s rigorous harmonic structures. Similarly, “Climb,” featuring Almazan, rides in on a wave of chiming chords and crisp drums, but just as quickly dissolves into torrents of thrashing bass and pounding toms. But The Wee Trio is also capable of digging in deep, and that tenacious thirst for groove—along with its magnanimity—is among its greatest strengths.