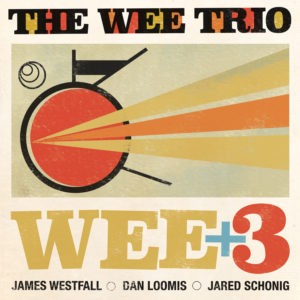 For its fifth album as a unit, The Wee Trio—James Westfall (vibes), Dan Loomis (bass) and Jared Schonig (drums)—have chosen to double down. The group has expanded twofold for this outing, recruiting colleagues Nicholas Payton (trumpet), Nir Felder (guitar) and Fabian Almazan (piano) to appear as guest soloists on individual tracks. The result is a spirited, intellectually rigorous 11-piece program that reflects the diversity of the individuals involved while pointing to a shared aesthetic of lush grooves and winsome improvising. The most engaging tracks on this disc are the ones that mix broad, watercolor ensemble play with pinpoint soloing and strong individual statements. “Rt3” begins in a mist of ambient sound, hazy to the point of abstraction, but then begins to crystallize around Felder’s rigorous harmonic structures. Similarly, “Climb,” featuring Almazan, rides in on a wave of chiming chords and crisp drums, but just as quickly dissolves into torrents of thrashing bass and pounding toms. Less extreme—but just as powerful—is “Belle Femme De Voodoo,” a New Orleans second-line groove featuring Payton at his most probing and articulate. Here, trad-jazz rhythms are bent and angled through a modern jazz prism, with Westfall sounding exotic harmonies in the upper register of his vibes and Schonig clacking out a fluid stream of notes on his snare. On top of it all floats Payton, whose bright, darting trumpet lines flit and flutter above the rolling sound. Behind all that bright-eyed interplay is a deep commitment to pushing at the boundaries, a mission objective that The Wee Trio—and its three visitors—are more than happy to share.