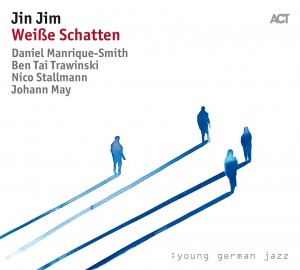 If the intial aggression of the quartet’s second album intimates that cosmic psychedelia is on tap, cuts like the restrained “Exploration” feature the band in relatively subdued territory, pulsing confidently behind the beat. “Days Of September” continues to showcase the band’s control of dynamics, even as a wah-wah guitar feature stamps out the composition’s mood about halfway through. “Mankafiza,” like “Duende” a bit earlier in the program, adds a Latin feel to the group’s interplay while exemplifying how rhythm sections don’t need to be flashy, just tight. But the feel of it all is that of a band searching for a distinct persona, even if the several evidenced here all have moments of near flawlessness.

Expansive tastes clearly are a part of what makes Jin Jim an intriguing troupe. And as its players further settle into their work, a distinct character, balancing some of the more bombastic, fusion-inspired moments with its more introspective tendencies, should yield up a vision of the band more cohesive than the span of Hawkwind to Herbie Mann.