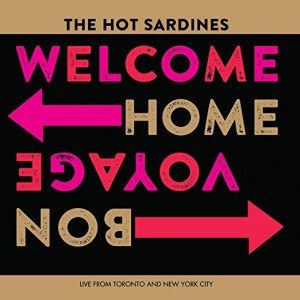 If one had never heard the music of The Hot Sardines but had seen a recent photo of the octet onstage, it would be easy to assume that vocalist and co-leader Elizabeth Bougerol’s washboard is the most unusual aspect of the band’s instrumentation. But that honor actually goes to the band member whose specialty is “playing the feet”—gifted tap dancer A.C. Lincoln. Of the dozen tracks on the hot-jazz band’s new live album, more than half of them feature tap-dance breaks that add an essential percussive element to the retro-leaning ensemble’s sonic fabric.

Welcome Home, Bon Voyage documents vibrant performances in two cities: Toronto (at Koerner Hall on April 14, 2018) and the band’s home base of New York (at Joe’s Pub on April 20–21, 2018). The Hot Sardines walk a path between fun and kitsch as they interpret works from such composers as Songwriters Hall of Fame inductee Clarence Williams (1893–1965), represented here with a lovely version of the ballad “Baby Won’t You Please Come Home” and a red-hot romp through the novelty tune originally titled “I Ain’t Gonna Give Nobody None O’ This Jelly Roll.” At the latter song’s conclusion, Bougerol tells the crowd, “It’s about dessert,” joking about the 1919 song’s innuendo.

Throughout the program, Bougerol offers a sly, charming delivery, and on a ballad like Fats Waller and Andy Razaf’s “Keepin’ Out Of Mischief Now,” there’s not much shelter provided by historical recontextualization, so the vocal performance must succeed on its own merits—as opposed to winning over the audience simply through an act of musical archeology. But sociohistorical context is always a factor when a 21st century band decides to tackle material like 1902’s “(Won’t You Come Home) Bill Bailey,” which addresses a romantic squabble, or 1928’s “Crazy Rhythm,” which contains the lyrics “What’s the use of Prohibition/ You produce the same condition.”

Musical chops abound here, as displayed by the dialogue between trumpeter Noah Hocker and clarinetist Nick Myers on “Jelly Roll,” or the poignant pianism of band co-leader Evan Palazzo on “Exactly Like You” and “After You’ve Gone.”

Following mid-July shows in Austria, the United Kingdom and Ukraine, The Hot Sardines will begin a leg of U.S. dates on July 26 at Bard College’s Fisher Center in Annandale-on-Hudson, New York.