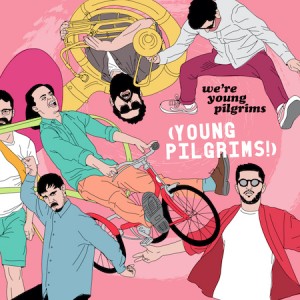 Yes, a nine-player brass band is going to be dynamically intense by default, but that doesn’t mean the style of Young Pilgrims’ full-length debut with Stoney Lane is a plainly read neon sign. Young Pilgrims’ brass arsenal could be used to provide loud but smooth and tightly interlocked jazz chords, but trombonist and lead composer Richard Foote makes it clear with the opening “Intro” that the band celebrates a healthy amount of cacophony and irregularity with its bright, piercing blasts.

Low, droning notes collide with a syncopated, single-note motif from the trumpets. The pitch of the latter launches an immediate sense of declarative dissonance with its augmented tone. “Canal Tripping” is even more melodically disorienting but, with its true-to-life anecdote as a backdrop, this role-playing piece gives a performance engaging enough to warrant a standing ovation. That’s not to say We’re Young Pilgrims lacks clarity or finesse. The production is exemplary. Notes are clear but not scrubbed of their personality. Honestly, We’re Young Pilgrims is meant to be experienced more than explained.