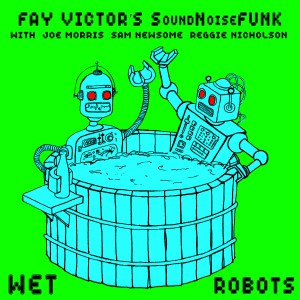 Anyone capable of turning both a Stooges song about shooting smack and a Kinks ode to the sun into free-jazz finery is worth a listener’s time.

Fay Victor hasn’t issued a bunch of music as a leader, and when she has, it’s largely been through her own Greene Avenue Music imprint. So, the New York vocalist hooking up with ESP-Disk for Wet Robots is a notable move. Her troupe here, augmented by guitarist Joe Morris, rumbles through aggressively artful free maneuvers, occasionally touching on minimal passages, as on “Whistling On A Skateboard,” when Victor summons guttural harmonies in tandem with Sam Newsome’s soprano saxophone.

Drummer Reggie Nicholson, Victor’s compatriot in various SoundNoise configurations, does an admirable job holding all of this together, and adds poignant detail to the bandleader’s spoken word and sound poetry.

Victor wields an outsized personality, and however ecstatic her group gets, the ideas she works to impart to listeners refuse to be overwhelmed by the churning backdrop. On “Information Highway,” the singer delves into the uses of religion and where it came from, tossing off some Spanish and German phrases before explaining the inner workings of the human brain. It might just short circuit, like a wet robot’s, she claims.

However rigorous the compositions and performances are here, folks who let Victor’s lyrics warp their minds might reap the finest reward.