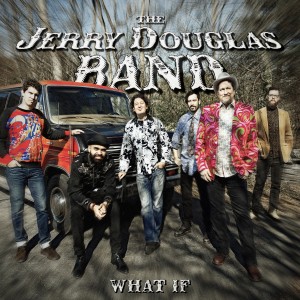 Dobro and lap-steel guitarist Jerry Douglas (nicknamed “Flux”) is well known in Americana music circles as a 14-time Grammy winner who has played on more than 2,000 recordings. Fans of guitarists Bill Frisell and John Scofield and banjoist Béla Fleck—all of whom have introduced many jazz fans to the joys of Americana music—may want to check out Douglas’ new album What If, which is informed by a jazz aesthetic. As a teenager, Douglas was entranced by the music of Weather Report and Chick Corea. He would go on to forge a career in which he has frequently collaborated with genre-blurring artists such as Fleck, violinist Mark O’Connor, bassist Edgar Meyer and singer Alison Krauss. The band on What If includes saxophonist Jamel Mitchell, who contributes a fine solo to Douglas’ original tune “Cave Bop,” and Vance Thompson, whose muted trumpet work opens “Butcher Boy” (another Douglas original). Both Mitchell and Thompson add some punch and drive to stellar arrangements of Meyer’s “Unfolding,” as well as “Freemantle,” a tune that Douglas wrote with Fleck. In addition to writing or co-writing eight of the 11 tracks here, Douglas also sings two covers: the Tom Waits tune “2:19” and “Hey Joe” (which was popularized by Jimi Hendrix). On the instrumental ballads “Go Ahead And Leave” and “The Last Wild Moor,” Douglas shows that in the right hands, a resonator guitar can cause listeners to reach for a hanky just as quickly as a dramatic, weepy vocalist can.