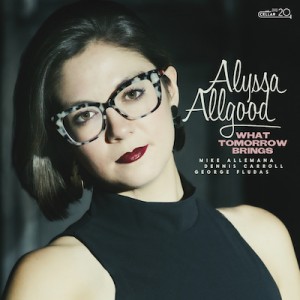 While Allgood is in her twenties, she sings with a depth beyond her years, particularly on her covers of Abbey Lincoln’s “Should’ve Been” and Dinah Washington’s signature “This Bitter Earth.”

The album starts with a breezy “There Are Such Things,” a tune identified with Frank Sinatra that showcases Allemana’s economy of style and Allgood’s mastery of scat. The mood swings with Carroll’s “Enclosure,” a love song from an introvert’s point of view, while “Memories,” one of two Allgood-Carroll collaborations, presents the singer as a cynical woman whose memories “are out of touch and so are you.”

An Allemana-Allgood duet on “For All We Know” paves the way for “Passing Glance,” a supple Carroll-Allgood effort with Allemana at his densest, Allgood assured and daring.