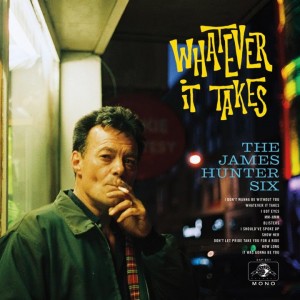 In the aftermath of the tragic death of soul singer Sharon Jones (1956-2016)—the most well-known artist on the Daptone roster—the label has continued to release great material, and the Brooklyn-based enterprise is looking far beyond its borough for talent. On March 30, the label will release the self-titled debut by Cuban big band Orquesta Akokán, and last month it released Whatever It Takes by The James Hunter Six, led by the British r&b singer-songwriter.

Hunter traffics in an aesthetic that owes an obvious artistic debt to classic artists such as Sam Cooke and Otis Redding, yet he injects an appealing individuality into his artistry. His smoky vocals have a vulnerable quality that makes him a relatable, believable protagonist on tunes like “I Don’t Wanna Be Without You.” The new album (his second for Daptone, following 2016’s Hold On!) is a taut, 10-track affair that was produced by Bosco Mann and offers lively, potent horn charts featuring Damian Hand (tenor saxophone) and Lee Badau (baritone saxophone).

Songs from this disc would fit snugly alongside cuts by Jones and Jackie Wilson on any mixtape bound for a sweaty basement party. And while a tune like “Don’t Let Pride Take You For A Ride” doesn’t exactly reinvent the wheel, it will inspire listeners to hit the dance floor. (According to his website, Hunter will tour Europe in March, followed by U.S. shows in April.)