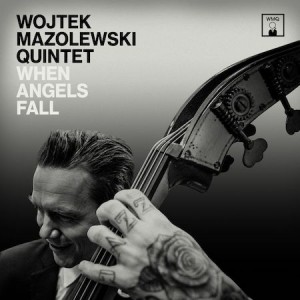 Wojtek Mazolewski deserves to be known for his exemplary, if almost entirely supportive, bass playing, bandleading and arranging that successfully realize high-concept repertoire on When Angels Fall. A star in his native Poland, Mazolewski, 43, here interprets the works of Krzysztof Komeda (1931–1969), his compatriot and inspiration. The bassist’s aesthetic and approach seem bound to the resources of his skilled players, rather than history or theory, though his rendition of Komeda’s “Astigmatic” is true to the original: not swinging but propulsive, not bluesy, yet conveying that connotation via pianist Joanna Duda’s tone-row, dissonant solo. There’s more balladry than hard blowing on When Angels Fall, but the quintet is a tight unit, addressing material written mostly for Roman Polanski movies, negotiating the contrasts, contrariness and syncopation without strain. Electronic effects are sparse but effective, especially a dreamlike distortion of the entire ensemble on “Sleep Safe And Warm.” Welcome Mazolewski and his quintet to the top tier of contemporary recording artists.