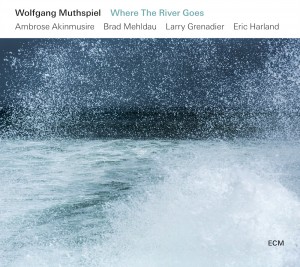 For his third ECM leader date, Where The River Goes, Austrian guitarist Wolfgang Muthspiel reconvened most of the personnel from Rising Grace, his second album for the label (Eric Harland replaces Brian Blade on drums). The quintet met up in February of this year at the same picturesque studio in the Alpes-de-Hautes-Provence region of southern France, where they’d recorded the earlier release.

On this album, Muthspiel again creates a space for his ensemble’s sonic musings, each player expounding on the guitarist’s musical assertions—his clean chordal structures, his descents into dissonance, his satisfying resolutions. Their discourse is one of understated beauty. Muthspiel wrote all but two of the eight compositions on the disc. A representative slice would include the title cut, which unfolds from a solitary guitar line into a rapturous, full-band manifesto; “For Django,” a tangle of melodic turns and intrepid solos; and “Descendants,” with its simple diatonic riffs serving as jumping-off points. Pianist Brad Mehldau’s “Blueshead,” one of the two non-Muthspiel tunes, makes full use of the group’s keen listening ability and dexterity, delving into the personal modes of each player.