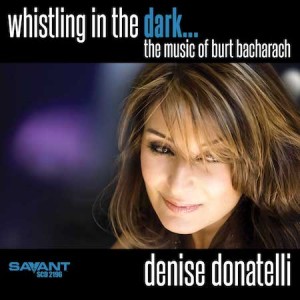 As one the great American songbooks, Burt Bacharach’s back catalogue is ripe picking for jazz-inflected interpretations. Vocalist Denise Donatelli is the latest in a long line to take on his magisterial compositions.

Collaborating with producer Larry Klein, the pair chose an artful selection; from the eternally-recognizable “The Look Of Love,” “Walk On By” and “A House Is Not A Home,” to lesser-known collaborations with Elvis Costello on “Toledo” and “In The Darkest Place.”

Klein’s arrangements are sparse, highlighting Bacharach’s melodic sensibilities, as well as Donatelli’s vocal phrasing that pitches itself between spoken word and singing. It is a technique that works better on some songs than others. The title track, for instance, is delightfully tender, allowing Donatelli’s voice to sit atop drummer Vinnie Colaiuta’s brushstrokes, while the poetry of “The Look Of Love” is brought to fore over Anthony Wilson’s guitar.

Yet, things fall apart on tracks that require greater gusto. It takes a brave soul to attempt “A House Is Not A Home” following Luther Vandross’ version and Donatelli sidesteps his soul for a more plaintive interpretation that lacks the gut-wrenching emotion. The same goes for “Walk On By,” where Dionne Warwick highlighted Bacharach’s sprightly rhythm, Donatelli draws out notes over Larry Goldings’ keyboard voicings, and the song drags.

Whistling In The Dark reminds us of Bacharach’s genius, but might be a prompt to seek better-known versions.

Whistling In The Dark … The Music Of Burt Bacharach: Whistling In The Dark; The Look Of Love; In Between The Heartaches; Toledo; Anyone Who Had A Heart; Walk On By; In The Darkest Place; Mexican Divorce; A House Is Not A Home. (41:35)
Personnel: Denise Donatelli, vocals; Larry Goldings, piano, keyboards, organ; Anthony Wilson, guitars; Larry Klein, bass, additional keyboards; Vinnie Colaiuta, drums.
Ordering Info: denisedonatelli.com