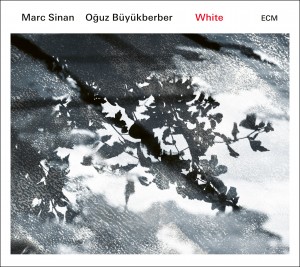 Guitarist Marc Sinan, who in the past has combined German, Turkish and Armenian musics, has been collaborating with clarinetist Oguz Büyükberber for about a decade. The pair’s latest work together, White, is split between its “Upon Nothingness” pieces, largely composed by Sinan, and a “There” sequence, written by Büyükberber, each of these being interleaved to create an unfolding conversation.

The crackle of vintage 1916 recordings infiltrates the “Upon Nothingness” sections, a series of field recordings that document the folk singing of Armenian prisoners of war. Sinan and Büyükberber engage in a sparse dialogue, the latter issuing some of his darkest, mournful phrases on bass clarinet.

The card pack is shuffled with “There I,” these earlier tracks being somewhat brief. Later, they expand, and the “Upon Nothingness” passages seem to be truncated. A mirage of a guitar forest spreads to the horizon on “Upon Nothingness, White,” imprinting a ghostly after-image. The pair’s highly expressive phrases diverge, but periodically arrive at a striking juncture, either by chance or design, their every note and gesture a sonic delicacy.