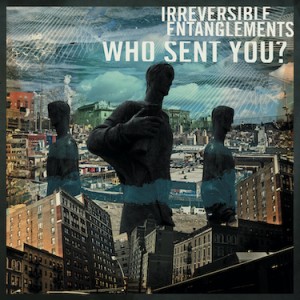 Who Sent You? is an expansive, meditative follow-up to Irreversible Entanglements’ explosive 2017 debut. Camae Ayewa leads the quintet through searing lyrics of black survival and power, and calls forth liberating black futures. On “The Code Noir/Amina,” she explores the history of black subjugation and intergenerational trauma, and asks, “At what point do we stand up? At what point do we give a shit?” Saxophonist Keir Neuringer and trumpeter Aquiles Navarro’s sinewy horns answer her call-to-action, accelerated by drummer Tcheser Holmes’ feverish percussion.

Self-described as a liberation-oriented free-jazz collective, IE formed after three of its members performed at a 2015 protest against police brutality. Its self-titled debut was a confrontational improvisation session that felt more like a release of today’s ugly realities than a conceptualization of a better tomorrow. Since then, the troupe has become more methodical and forward-looking. In December 2019, it previewed new visions with “Homeless/Global,” a 23-minute single that found Ayewa chronicling forgotten history and border violence, while the band worked through celestial grooves. But the quintet explores its Afrofuturist underpinnings more deeply for Who Sent You? For “No Más,” Navarro and Neuringer engage in astral synergy while Ayewa charts a path toward “infinite possibilities ... coming back around to love ourselves fully.”

IE’s latest effort peels back the layers of black existence to celebrate resilience and community while continuously moving toward liberation.