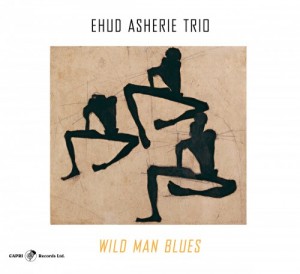 Ehud Asherie’s amiable new piano trio album, devoted entirely to standards, is both quaint and audacious. More often than not, modern jazz pianists—aside perhaps from Bill Charlap—are opting to write and record their own compositions, rather than prove their familiarity with, say, the Gershwin songbook. But Asherie succeeds here as an interpreter of old material thanks to his refreshingly recherché song choices: “And Then She Stopped,” and the title track, written by Louis Armstrong and Jelly Roll Morton.

It’s a testament to Asherie’s keyboard wizardry that he should take on “Wild Man Blues,” a tune most famously recorded on cornet, in 1927. You can’t bend notes on a piano, but Asherie certainly makes a gospel-inflected go of it on this deeply swinging rendition. Although some of these tunes are a bit predictable in terms of form, Asherie makes things fresh with a number of rhapsodic solo introductions featuring classical flourishes. But swing is the essence here, and Asherie is ably accompanied by two masters of timekeeping: bassist Peter Washington—who serves as the ballast in Charlap’s trio—and drummer Rodney Green. Though they take some solos of their own, they exist primarily in this group to accentuate Asherie’s sensitive musings.

The material here could suggest that Asherie has some antiquarian tendencies—he previously recorded Shuffle Along, a tribute to stride innovator Eubie Blake—but he isn’t clinical about the past. Filtered through Asherie’s dexterous fingers, all of the songs on Wild Man Blues feel alive. And if anything, the bandleader seems to abide by a dictum put forth by the great stride practitioner James P. Johnson: He keeps it modernistic.