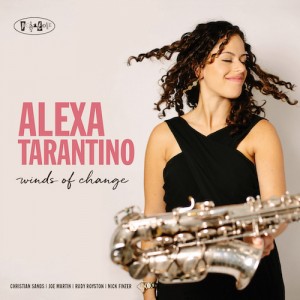 The benefit of Alexa Tarantino having spent years in the trenches, serving as a sideperson for a variety of ensembles and building a reputation as a pliable and thoughtful saxophonist, is that when it was time to put together Winds Of Change, her leader debut, she had a huge cast of players to choose from to join her.

Pianist Christian Sands, bassist Joe Martin and drummer Rudy Royston throw themselves fearlessly into each song here, giving the leader a perfect foundation to build upon. With their help, Tarantino dusts off some of her oldest compositions, including the Kenny Wheeler-inspired “Square One” (apparently the first piece she ever wrote), which gently sputters and hums as the saxophonist takes a carefully measured solo turn, and “Wisp After Wisp,” an ode to her grandmother that the band helps steer away from its melancholic source material into brighter, modal territory.

The troupe also inspired Tarantino to write material showcasing the assembled players, as well as her various instruments of choice. On the swinging “Face Value,” that spotlight gets turned on trombonist Nick Finzer, who responds to the bandleader’s solo with a run that wittily employs discordant tones and the splashy honk of his horn. Tarantino switches to flute briefly for a rendition of Antonio Carlos Jobim’s “Zingaro,” leaning into the romantic elements of the melody and the instrument’s floating timbre. Throughout Winds Of Change, though, Tarantino keeps her playing open to enable her compatriots to rise to the fore. For someone whose name and image dominate the album’s cover, Tarantino offers up a selfless work.