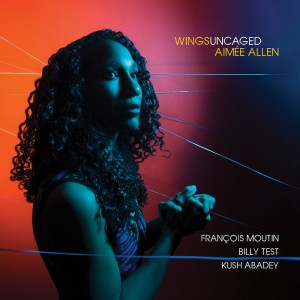 A fine singer who has a warm and inviting voice along with a conversational style, Aimée Allen has been part of the New York jazz scene since 2002. Wings Uncaged is her fifth album as a leader.

On this program, which balances six standards with five originals, Allen is joined by bassist François Moutin, pianist Billy Test and drummer Kush Abadey. Moutin is practically the co-leader, having more solo space than pianist Test, taking the most adventurous improvisations and contributing “Touch The Sun,” for which Allen wrote lyrics.

While the treatments given to the standards here are pleasing, it’s the originals that command attention, particularly the singer’s astute lyrics. Likely to get the most attention on this intriguing set is “Democracy How (Harmony And Dissonance).” Allen’s lyrics express her feelings well, particularly during this passage: “They tell me all I have to lose/ By looking and listening/ By reading and researching/ Or gathering several points of view/ They tell me one and one is not two/ The death of truth.” It’s an effective musical poem as well as a political protest.