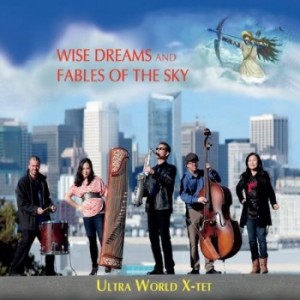 Diverse aspects of Greek mythology, ancient China and the multiculturalism of contemporary San Francisco all factor into Wise Dreams And Fables Of The Sky by the Ultra World X-Tet. The bulk of the Bay Area quintet’s third release is devoted to the titular suite, a four-song adventure inspired by Homer’s The Odyssey. Gary Schwantes (saxophones, bamboo flutes, ocarina) composed nearly all the material here, which was recorded live at San Francisco’s Old First Church with Doug Ebert (bass), Surya Prakasha (drums), Yangqin Zhao (yangqin, a Chinese hammered dulcimer) and Winnie Wong (guzheng, a zither that originated more than 2,500 years ago and became common during the Qin dynasty). The result is a smorgasbord that organically blends straightahead jazz, fusion, funk, blues, world music and other sonic elements. Listeners don’t need to know the plot of The Odyssey to fully appreciate the dramatic, cinematic qualities of this instrumental program; however, thanks to liner notes that outline the plot of books nine through 12 of Homer’s epic poem, one can make a game of matching melodic segments with their corresponding literary scenes, such as Odysseus’ encounter with the Cyclops or his return to Ithaca.

Although this is a concert disc, there is no stage banter and very little crowd noise, giving it the feel of a studio recording. A couple of memorable motifs—one involving a march-like rhythm and another featuring the guzheng—provide a buttress in the sturdy architecture of the suite. A far cry from a mere exercise in eclecticism, this album invites contemplation about the enduring components of that most human of endeavors: storytelling.