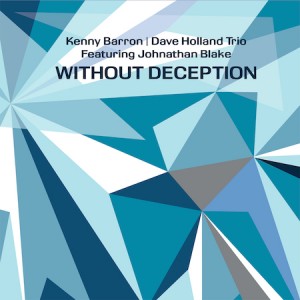 The rapport Dave Holland shares with Kenny Barron is as unimpeachable as their individual talents. Six years ago, Impulse issued The Art Of Conversation, a master class in crafting sparkling duo performances.

That accord marks this new venture as they add Johnathan Blake—his drumming contributing a flinty dimension to the mix. Often, he kindles the dialogues with a supple propulsion and inventiveness that never overshadow the established bond between the two elder players.

Barron’s affinity for Brazilian music reveals itself immediately on “Porto Alegre,” a samba-driven original that opens the disc. After Barron hammers a bouncy riff that quickly flowers into a pithy melody, Holland locks in the groove with both Barron’s left-hand comping and Blake’s shuffling groove. As the song progresses, the trio engages in some improvisational tradeoffs that are so superb in transition it nearly goes unnoticed, even when Blake rises to the fore with a thundering solo.

Throughout Without Deception, Barron and Holland’s artful conversing ascends and deepens with ample support from Blake’s kinetic and empathic input.