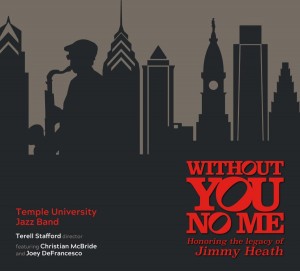 Without You, No Me is a Philly-centric big band feast of the ears celebrating the life and legacy of local jazz hero Jimmy Heath, who passed last year at age 93. It’s also trumpeter and Temple University Jazz Band director Terell Stafford’s personal expression of gratitude and debt toward the beloved tenor saxophonist, bandleader and composer, one of three iconic musical brothers from the City of Brotherly Love who made substantial contributions to the straightahead jazz canon. Stafford regarded Jimmy as a friend, colleague and mentor ever since touring with him in the Dizzy Gillespie Alumni All-Star Big Band some 30 years ago.

Without You, No Me is the second new album released in the wake of the COVID pandemic by the Temple University Jazz Band under Stafford’s direction. While the first, Covid Sessions: A Social Call, was recorded long-distance — in students’ homes across the country, via portable sound rigs devised by recording engineer John Harris and Temple Music Technology Professor Dr. David Pasbrig — Without You, No Me was captured at much closer range. The musicians were able to convene in person in the spacious Temple Performing Arts Center in April 2021, with filters and covers over the bells of their horns. Harris and Pasbrig’s rigs were used to record remote contributions by two favorite sons of Philadelphia jazz, bassist Christian McBride and organist Joey DeFrancesco, who appear as special guests.

The album’s title track, originally penned by Heath for his mentor Dizzy Gillespie, comes full circle here, acknowledging the influence that Heath has had on Stafford, his students and future generations of jazz musicians. Todd Bashore, a former student of Heath’s at Queens College, composed album opener “Passing Of The Torch” in honor of his mentor. Heath’s compositional gifts are further represented by “The Voice Of The Saxophone,” rendered in lush and vibrant hues by this stellar student ensemble. Saxophonist and bandleader Jack Saint Clair, a Temple alumnus, composed the rollicking “Bootsie” in honor of another linchpin of the Philadelphia scene, tenor saxophonist Bootsie Barnes, who died in April at age 82. Saint Clair also contributes a brassy rendition of the standard “Please Don’t Talk About Me When I’m Gone” and a sultry arrangement of “The Blues Ain’t Nothin’ (But Some Pain),” a tune by another Philladelphia jazz giant, organist Shirley Scott. McBride’s “The Wise Old Owl” is an homage to the late Temple University basketball coach John Chaney, a sage mentor in the world of college sports. McBride lends his instrumental voice to John Clayton’s arrangement of the classic “I Can’t Give You Anything But Love,” engaging in a spirited exchange between his bass and the ever-attentive ensemble. At the album’s close, McBride joins his longtime friend DeFrancesco for an improv-fueled romp through Juan Tizol’s “Perdido.” DeFrancesco’s organ chops are on full display on his own composition, “In That Order,” which pianist Bill Cunliffe arranged for the occasion. Throughout Without You, No Me, a shared enthusiasm and heartfelt gratitude among Philly’s finest rule the day. DB