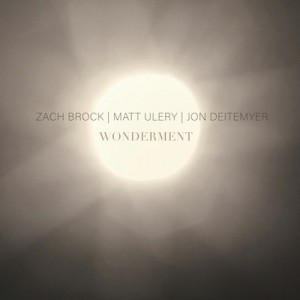 Musicians who play together for a long time develop a private language, and the joy they take in sharing that dialect is palpable. So, it is with violinist Zach Brock, bassist Matt Ulery and drummer Jon Deitemyer.

Though Wonderment is the first full-length from this inspired Chicago-based trio, the group first started playing together informally in 2005. After pursuing separate musical journeys for nearly a decade, they sealed the deal in 2014 with a collective track recorded for Ulery’s In The Ivory and finally committed to becoming the bona fide band that produced Wonderment.

From the opening title track, a playful Brock composition that ranges from the hills of Appalachia to a smoky after-hours club, it’s clear these three consummate artists thoroughly enjoy each other’s company. “Nightshade,” an Ulery composition, showcases the pluck-counter-pluck dynamic the bassist and violinist have perfected, and later swells toward an indie rock-style chorus.

“Cry Face,” another Brock composition, is punctuated by abrupt starts and stops, soaring on the violin’s wildly escalating lines. But it’s not all fun and games. Brock, Ulery and Deitemyer are dead serious about their playing, and dig deep on tracks like “Yge Bieve,” which rides in on a loping bass that transports listeners to gypsy country. Plaintive at times, it sounds almost like an elegy, then climbs toward a crescendo before resolving with a single pluck.

Taken as a whole, Wonderment augurs an auspicious beginning for a collective that’s been playing together for years, but only recently started to fully explore its abilities.