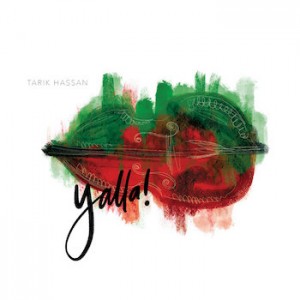 Tarik Hassan’s second album, Yalla!, takes its title from the Arabic word for hurry. It informs some of the album’s most compelling moments, but also the record’s urgency to display the leader’s versatility while undermining the recording’s cohesion.

The first sound on the record is Hassan’s warm, supple bass. He sets a brisk tempo on the title track, keeping the ensemble moving as violinist Kimberly Zielnicki waxes dramatic in a Roma-tinged solo. Pianist Ben Irom’s accompaniment sets up a Latin feel, which the bassist lucidly elaborates on during his own solo. Such eclecticism reflects Hassan’s biography: He was born and raised in Florida by Irish and Palestinian parents, and worked in New Orleans for about 10 years before settling in Austin during 2013. The next tune, “Arab Spring,” is named for the wave of protests and uprisings that swept the Arab world in the early 2010s and proves that Hassan can use pacing and mood to suggest a narrative thread. First a low-register piano figure, pizzicato violin and the leader’s bowed theme express a sense of foreboding. Then pianist Irom surges forward at a breakneck pace over Noah Mosgofian’s hand percussion, evoking that moment when dissatisfaction gives way to action.

After a solid opening, though, Yalla! seems to lose focus. There’s a tango, an uptempo New Orleans party groove and a multi-segmented Celtic suite, each competently executed but arbitrarily sequenced. The album comes off feeling more like a resume that ticks off the different things that Hassan can do than a group of interrelated compositions.