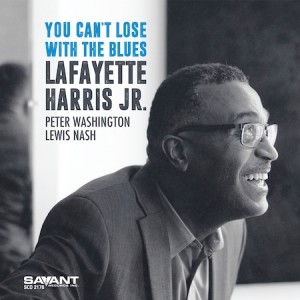 It’s good to get along with your boss. The proof can be heard on You Can’t Lose With The Blues, the new straightahead gem from pianist Lafayette Harris Jr. For the past few years, he has been in the working band of saxophone legend Houston Person, who produced this album. The recording includes some material that Harris has played on tour with Person, including the beautiful ballad “I Love You, Yes I Do.” Harris’ deep familiarity with standards—such as “Wonder Why,” which he played on tour when he was in singer Ernestine Anderson’s band and then later performed with Person—allows him to craft personal, powerful renditions with subtle coloration and graceful nuance.

Harris recruited esteemed veterans Peter Washington (bass) and Lewis Nash (drums) for this winning, 12-song program of mostly standards, such as “Don’t Let The Sun Catch You Crying” and “Ev’ry Time We Say Goodbye.” Nash’s authoritative cymbal work on the former track—as well as Washington’s arco work on the duo arrangement of the latter track—reflect the leader’s ability to recruit ideal personnel and then let them soar. Harris ventures beyond the Great American Songbook with a delightful curveball: a luminous interpretation of “Love Me In A Special Way,” the DeBarge r&b hit from 1983. That track is followed by the most raucous number on the album, a rousing rendition of Charlie Parker’s “Bloomdido.” Harris dazzles with his solo treatment of Percy Mayfield’s “Please Send Me Someone To Love.”

Harris’ compositional skills are on display with three original tunes. “The Juicy Blues” is a satisfying swinger and “Blues For Barry Harris” is a fitting tribute to one of the pianist’s mentors. Sometimes an original tune can feel out of place amid a program of standards, but that’s certainly not the case with the title track here. Person probably had a strong sense of how to approach the production on this tune: Harris wrote it or him and played on the version that the saxophonist included on his 2014 album, The Melody Lingers On. Overall, this album illustrates the power of playing to one’s formidable strengths.