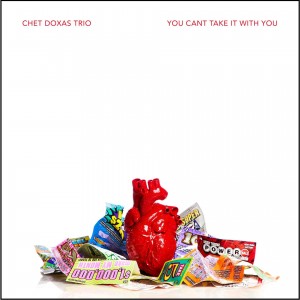 Chet Doxas composed 10 tunes, wrote extensive liner notes and crafted an original sculpture (see cover image) for this intimate new trio album with pianist Ethan Iverson and upright bassist Thomas Morgan. The 12th release from the Montreal-bred, Brooklyn-based saxophonist, You Can’t Take It With You is an inspired project that took about a year to evolve through a heartfelt, deliberate process that ultimately yielded a truly personal work of art. On the advice of Carla Bley and Steve Swallow, who gave him the idea to start his own trio, Doxas composed at a rate of one song per month; he didn’t decide upon his handpicked bandmates until he had already completed several pieces. In accordance with Doxas’ vision, You Can’t Take It With You was recorded live in the studio with no separation between the three players. “I like the studio to feel as much like a gig as possible,” the saxophonist writes in a statement describing the session. “We had performed the night before, so we set up in the round and played the tunes in the same order as on the gig.” Featured here on tenor, Doxas gave careful consideration to instrumental tone and technique in choosing Iverson and Morgan, elite improvisers whose mastery of touch can be felt deeply throughout the program. Highlights include the title-track opener, where threads of unison melodies result in a virtual 3D timbre-merger of tenor, piano and bass. A minimalist, monotone saxophone pulse functions like a syncopated heartbeat on “Lodestar (For Lester Young),” which climbs chromatically through 12 keys as Doxas toys with rhythms, textures and articulations. “Part Of A Memory,” with its catchy offbeat melody and slightly bent harmony, has a blues-in-orbit vibe. And the meditative rumination of “All The Roads” was inspired by the grateful soul of children’s television icon Fred Rogers (1928–2003), a deceptively hip cat who was a strong advocate for jazz. You Can’t Take It With You can be experienced online in its entirety thanks to a series of up-close “live off the floor” videos shot by cinematographer Graham Willoughby.