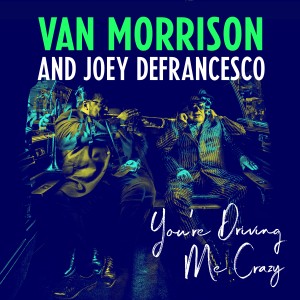 At 72, Van Morrison continues to prove he’s among the hardest-working vocalists in jazz and its adjacent musical territories, showing no signs of artistic fatigue on You’re Driving Me Crazy, his 39th record.

The album comprises an eclectic collection of songs, drawing the bulk of its material from the showtune canon, Chicago blues and even Morrison’s own illustrious discography. But the distinguishing feature on this latest project is the presence of organist Joey DeFrancesco, whose richly expressed keyboard harmonies and laconic trumpet interludes provide the scenery through which Morrison and the rest of the ensemble explore.

Morrison knows how to animate an album, varying pace and mood to supreme effect. Sometimes the musicians pursue each other at a sprint, as on the harried “Evening Shadows,” which finds DeFrancesco creating a vortex of colliding lines. Other times, the pace is more of a stroll, with the musicians allowing greater time for introspection and nuance.

DeFrancesco, a well-articulated improviser, proves a suitable foil for Morrison’s heartfelt vocals, noteworthy here for their humanity and warmth. And there’s a sense of grit to “Travelin’ Light,” on which Morrison opines for a lost lover: “She said goodbye/and took my heart away/So from now on/I’m traveling light,” he laments with a sand-in-the-shoes sense of road-weariness.