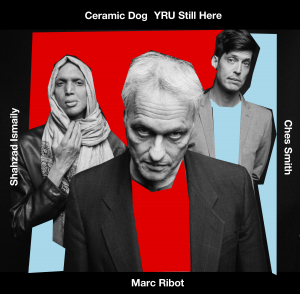 To cop an apt cliché, Marc Ribot has long been an interesting bunch of people.

He’s a powerhouse, but also a primal guitarist, ever-restless composer and ace sideman for John Zorn, Tom Waits, Elvis Costello and other crafty pop players. Many of those personae are freely and unapologetically channeled into his band Ceramic Dog, a trio with bite and insight, a place where punk and funk, echoes of Captain Beefheart, jazz, fusion and Latin pulses live together—artfully, if not peacefully.

“Peaceful” just isn’t in his vocabulary for YRU Still Here, the band’s first release since 2013’s Your Turn.

With the Dog, Ribot emerges, again, as a kind of musical rebel with claws, unleashing the punkish intensity lurking within the guitarist’s musical world, and with a pair of natural, empathetic allies—bassist and multi-instrumentalist foil Shahzad Ismaily, and drummer Ches Smith, whose versatility in and out of the jazz and rock realms has made him a regular Ribot collaborator. This fired-up format, flavored and roughed-up by vintage synth noises, occasional horns and other odd color scheming, amounts to something new—and even something new within Ribot’s world of ideas.

Listeners get an idea of what’s in store with the snarling textures and lyrical sentiments of the opening track, “Personal Nancy,” with the leader bellowing, “I got a right to scream like an idiot/I got a right to bitch and moan/I got a right to yell like a stuck pig at the Walmart checkout counter.” Members of the group freely exercise their right to express themselves elsewhere, from the chant-like “Muslim Jewish Resistance” to the Latin-groove-powered tale of bullying, “Pennsylvania 6 6666,” and the anti-anti-immigration rant of the short and punky “Fuck La Migra.”

Of late, Ribot has been experimenting with spoken-word concepts, sometimes at the expense of his strongest suit, as a distinctive guitarist and instrumentalist. But Ceramic Dog, which tends to steer away from guitar muscularity in favor of songs and vibes, represents a successful and inventive merger of his impulses, from his David Thomas-like holler to the sonic pleasures of “Agnes.” In other idiom-hopping, the trio goes all Funkadelic on “Oral Sidney With A U” and “Freak Freak Freak On The Periphique” and merges surf rock and retro sci-fi on the closer, “Rawhide.”

Ceramic Dog is a fascinating new wrinkle in the diverse terrain of the decades-deep Ribot bandscape, going back to his groups The Rootless Cosmopolitans, Los Cubanos Postizos and The Young Philadelphians. This time out, he and his crew have mustered an angry, righteously indignant, sonically feverish and engaging variation on the party-band tradition, lined with a fresh brand of catharsis.