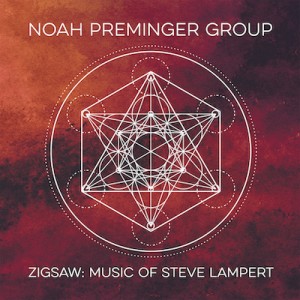 Tenor saxophonist Noah Preminger met trumpeter Steve Lampert during 2010 on a gig in New York’s West Village and, as their musical friendship deepened, so did Preminger’s admiration of the elder statesman’s compositional chops. A few years on, he asked Lampert to write a piece featuring himself with an ensemble; Preminger now has issued the recording of that composition—Zigsaw: Music Of Steve Lampert—on his own label.

The mostly improvised piece lasts almost 50 minutes and is offered as a single track—a straightforward enough undertaking, it would seem. But beyond the cut’s opening salvo—a downward-arpeggiated chord—there is nothing straightforward about this composition. In the liner notes, Lampert wrote that he envisioned the piece as a zigzagging dream that circles back upon itself 12 times. Each cycle comprises a 24-bar vamping melody section underneath a soloist; an open improvised section; a progressive reiteration of two of the 24 bars; and a “fantasy” section, replete with guttural electronics and filled, at times, with sheer musical abandon. Like a dream, though, it makes sense on an intuitive level.

Preminger’s septet, which counts Rob Schwimmer on clavinet and the continuum fingerboard (the source of the eerie electronica), executes Lampert’s challenging compositional constructs. In the hands of a less exacting group, the work easily could have devolved into a surreal pit of noise, minus any intentionality. But the players’ commitment to finessing the many winding turns of this piece is what makes it exciting—and surprisingly fun—to follow.