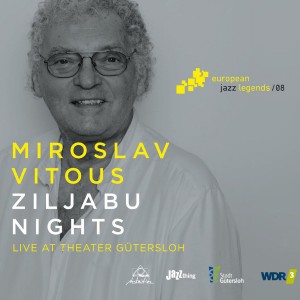 As bassist Miroslav Vitous says during the on-stage interview that closes out the European Jazz Legends series recording Ziljabu Nights: Live At Theater Gutersloh, his designs were to play his instrument as musically as possible, rendering his time-keeping rhythm-section role moot. What Vitous, now 68, has accomplished with this live album is to remind listeners of the place he occupied during the seminal early years of the 1970s, when he was a founding member of Weather Report with keyboardist Joe Zawinul and saxophonist Wayne Shorter—and to display where he’s taken it since.

Gary Campbell (tenor saxophone) and Robert Bonisolo (tenor and soprano saxophones) provide the melodic heft, while Aydin Esen the colorist on keys occasionally works in tandem with Vitous to provide what bottom end does exist to this relatively weightless music. Four Vitous compositions delight in abstraction when not lyrically swimming, and are mostly pulseless. Then there’s a nearly 14-minute dance through “Stella By Starlight Variations,” featuring the leader’s characteristically squishy bass and arco leading the charge, and “Gloria’s Step Variations,” Vitous’ obvious nod to major influence Scott LaFaro. On the one solo piece, “Gloria’s Step,” the bassist leans in and out of the song’s endearing melody with a more conventional approach.

The recording quality is excellent, each member heard crisply and cleanly. Gatto’s drums, in particular, sound immediate, every subtle move and crack gesture a necessary punctuation or sheen.