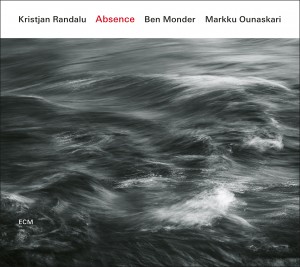 Pianist Kristjan Randalu’s ECM debut slips seamlessly into the imprint’s MO. But some of the original compositions here spit more fire than one might expect from the tide-less mass of water printed on black-and-white album cover.

The 40-year-old Estonian pianist is joined by American guitarist Ben Monder and drummer Markku Ounaskari, a Finn, for Absence. And a swell of ideas neatly are bundled up by the trio’s responsive timing.

“Forecast” builds into a storm, but opens with nary a cloud in the sky. After a short introduction, Randalu ushers in the others with a bit of muscle. But there’s plenty of ethereal humming to be found here as well. Monder bends clouds on “Lumi II,” but by tune’s end, the band is in full frenetic-arpeggiation mode, with Randalu skittering nimbly across the keyboard.

The bandleader is a pillar of stability. He clearly is capable of breathtaking displays of technique and showmanship, but employs challenging runs with a noble conservatism, while Ounaskari rarely interrupts and always is right in step. By album’s end, the titular track drifts into that bleak black-and-white swell, absent the vivaciousness of the session’s start.