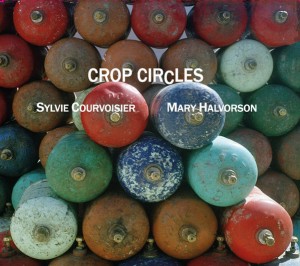 This debut recording between two of New York’s most idiosyncratic and distinctive improvisers reveals just what careful listeners pianist Sylvie Courvoisier and guitarist Mary Halvorson really are. Each musician contributed pieces to the album, which is deeply chamber-like in its deft, interactive intimacy. But the real action is where they take those written themes.

“La Cigale” gets its febrile energy from the mixture of Courvoisier’s inside-the-piano tinkering, while Halvorson continues to warp her tones into something as alien and consonant as metallic clatter. Here and elsewhere there’s no missing the intense dialogue that occurs, with the musicians eschewing easy back-and-forth in favor of free association, routinely coming together and drifting apart with unspoken grace. The hurtling “Downward Dog” contains none of the meditative calm that title might suggest, instead serving up a bounty of twined episodes, where knotty passages are essayed in coiled lockstep, only to witness the performers untangle their lines and start all over again. It’s all about the way they navigate the writing as a pair of individuals, always serving the cumulative sound but remaining very much themselves.