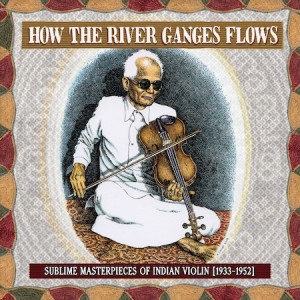 Any project that archivist Christopher C. King works on is bound to arrive with some backstory as interesting as the Ganges River is long.

For How The River Ganges Flows: Sublime Masterpieces Of Indian Violin (1933–1952), released on Jack White’s Third Man imprint, King glosses over the story a bit, just briefly mentioning that a friend sent him a giant box of 78s that arrived with an elephantine thump on his Virginia porch.

Apparently, in the world he inhabits, that’s not too strange an occurrence. But the gift spun the record producer into a historical frenzy, one that easily could turn into a consuming passion, much the same way Greece’s vernacular music provided King inspiration for a handful of projects, including the 2018 book Lament From Epirus.

How The River Ganges Flows covers a not too dissimilar span of time, but in a region then being carved up following another chapter of British colonialism. Much like the Nonesuch Explorer series that found white ethnomusicologists collecting field recordings from places like Indonesia, Pakistan and Zimbabwe, King’s work here has the unavoidable glint of voyeurism. He acknowledges as much in his liners, saying, “from the monoculture of the West, India is often exoticized,” and takes care to mindfully navigate the music here.

Regardless, his admiration for the violinists—moving from Northern Hindustani ragas to the South’s Carnatic music—is unquestionable.

There’s less context for the music included on Ganges than on projects like King’s Why The Mountains Are Black: Primeval Greek Village Music 1907–1960. But the affecting glissandi of Bengali violinist Paritosh Seal (who, according to King, recorded 77 78-RPM discs and here is accompanied on several tracks by only tabla and tanpura) and Carnatic teacher Mysore Chowdiah (who invented a seven-string violin to amp up the instrument’s volume) seems like the first tributary that the archivist’s set to explore on his latest musical obsession.