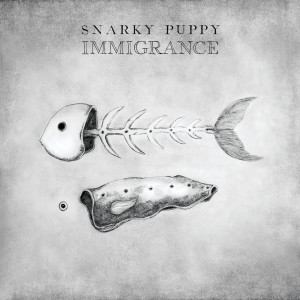 On a first listen to Snarky Puppy’s Immigrance, you might wonder if you hadn’t accidentally downloaded a sample bank—one of those collections of prepared tracks and 30-second blasts that sound designers use to score commercials. It’s the horde of guitars, at once creamy and crunchy, loud and low-impact; the frictionless synthesizers; and the direct-to-digital sound of the recording.

Effective commercial soundtracks will flare up and grab your ear in the time it takes a YouTube ticker to count down from 5 seconds, but they won’t fully distract you from the product being advertised. With Snarky Puppy, a loosely assembled team of instrumental whizzes led by bassist Michael League, there’s no product being pushed. But there is usually a thematic conceit to League’s records, and when writing the tunes for Immigrance, Snarky Puppy’s 12th album, he was thinking about migration and movement. There are anti-Trump overtones to that, for sure, but subtly suggesting your disagreement with the 45th U.S. president no longer feels bold on its own. And by and large, this album does little to show any emotional context or solidarity with social concerns.

Snarky Puppy developed as a live band driven by a studio technician’s ethic, and during the past dozen years, its music has become a genre of its own—one with remarkable popular appeal, but also a kind of grandiose banality that scuttles both the live energy and the richness of detail that ought to make this band stand out.

It’s difficult to focus hard on music like this, to really climb inside of it. But what happens when you try? Pretty soon, ear fatigue. Throughout Immigrance there are usually three or four electric keyboards, three guitars, League’s electronically juiced-up electric bass, horns and a violin all slathered across the center of your ear-space. Despite the virtuosity of each player and the precision of the recording, the music sounds fogged up—whether on a jouncing, groovy tune like “Chonks” or a Turkish-music-tinged “Even Us.” (The latter nearly is saved by a pensive flugelhorn solo by Jay Jennings, a rare moment of intimacy on this record.)

The brief “While We’re Young” rests on a shrugging ’70s-funk beat, and the twisty horn line has plenty of potential. But everything is doused with a frizzy, echoing effect, as if spraying a row of healthy, emerald crops with pesticide. There are moments on “Coven,” a slow, drifting piece, when the curling bass line creeps up on something close to plangency or wistfulness. But Snarky Puppy’s melodies almost never declare an emotional intention; they’re soft and rounded, and end up feeling utterly general, even when sourced from a specific music tradition. And no matter what they’re playing, the musicians seem haunted by a too-complete awareness of what they’re aiming at, and how to get there. Playing with metronomic exactitude, they execute what’s asked of them—and that’s it.