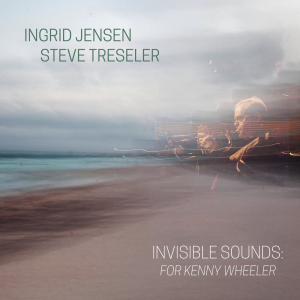 There’s not yet a consensus around how to situate Kenny Wheeler—the Canadian-British trumpeter and prolific composer, who died in 2014—in music history. There’s decent agreement that his ECM debut, Gnu High, is an essential contribution to the story of 1970s jazz. We know that he wrote rapturously for groups small and large, with melodies as comforting as a folk song and as dreamy as a fantasy tale. Beyond that, the standard line is waiting to be written.

This helps explain why trumpeter Ingrid Jensen and tenor saxophonist Steve Treseler feel an urge to help concretize his legacy. Both played with Wheeler and developed a fascination with his music, and after his death, Treseler joined with Jensen to honor him. They arranged tunes from across Wheeler’s career for a quintet that featured Jensen’s regular rhythm section: Geoffrey Keezer on piano, Martin Wind on bass and Jon Wikan on drums.

The resulting album—Invisible Sounds: For Kenny Wheeler, mostly recorded in 2015—offers some bustling, trafficky numbers like “Foxy Trot” (from 1986’s Double, Double You) and “Old Time” (from 2015’s Songs For Quintet, Wheeler’s final ECM recording). But the marrow of this album lies in its ballads.

Even on his quietest pieces, Wheeler insisted on counter-intuition and elliptical grace. On tunes like “Gentle Piece” and “Old Ballad”—fused here into a medley—or “Where Do We Go From Here,” his trumpet (or flugelhorn) carried melodies that were equal parts awe and sagacity. Jensen’s improvisations have their own rolling drama, related to Wheeler’s style but not directly born from it. Where he played notes square on, as if helping to define a center for his flush compositions, Jensen angles into things from below or above.

On “Kind Folk,” “Gentle Piece” and the two versions of “Foxy Trot” that bookend the album, her playing is insinuative, proudly tilted, reflecting the influence of Woody Shaw, as well as Wheeler. Treseler, meanwhile, brings a billowing enthusiasm to every track, reveling in his debts to Wayne Shorter and Michael Brecker, hacking down in vertical dashes and rising again in bubbling, bluesy phrases.

Keezer is alight as usual on piano, taking a forceful solo on “546” that shakes up the song’s elegant poses and offering a seminar in restraint during other features. But the secret weapon is Wind, whose frothy bass playing and constant rhythmic realignments go beyond honoring the brilliant design of these tunes.

When the group adds a sixth voice—Christine Jensen’s soprano saxophone on the studio version of “Foxy Trot” or Katie Jacobson’s reedy vocals on two ballads—listeners are reminded of how much texture and dimension Wheeler’s tunes can admit. There are unending ways to build upon his songbook; Invisible Sounds is just one, and a fine way to begin.