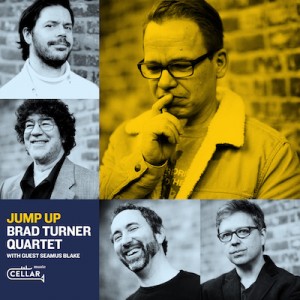 Jump Up—culled mostly from a single studio session at the close of a snowy, three-day stint at a Vancouver club—finds trumpeter Brad Turner making the most of a small window of time, unloosing nine original hardbop-leaning tunes with swinging urgency alongside tenorist Seamus Blake.

While the gig was only a weekend and the session a single day, there’s no shortage of familiarity among the five musicians here. Blake ignites the band, the two horns sparring at every turn. Turner, whether on trumpet or flugelhorn, is a confident composer, employing inspired harmonies with Blake’s bellowing tenor leading the up-tempo material. The titular “Jump Up” is a burner with drummer Dylan Van Der Schyff summoning a waterfall of cymbals, while pianist Bruno Hubert patiently hammers a thick progression. He switches to Rhodes for the simmering “Likes” and pushes the band into looser territory for “Superlux,” a modal hot-pot of soaring soul. Bassist André Lachance kicks off the 11-minute “Catastrophizer” as Turner dribbles out woozy lines amid Blake’s fiery testimony. The rhythm section is a chaotic swell beneath the two horns, its manic energy hinting at the artistry unfurled during the troupe’s live engagement.