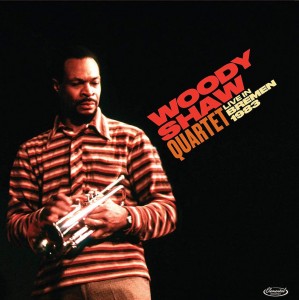 Trumpeter/flugelhornist Woody Shaw’s second quintet with trombonist Steve Turre, pianist Mulgrew Miller, bassist Stafford James and drummer Tony Reedus in the early 1980s was one of the great modern jazz ensembles of its time, grounded in the straightahead tradition of bebop, but embracing newer avant-garde concepts.

When the group performed in concert at Post Aula in Bremen, Germany, on Jan. 18, 1983, Turre was not present for some reason; the quintet was reduced to a quartet, with Shaw the sole front-line horn player. With Turre missing, the gig turned out to be as much a showcase for the well-established Shaw as it was for Miller, who would become a Jazz Messenger later that year and, like Shaw, eventually would develop into one of the best-of-the-best on his instrument.

Recently discovered and previously unreleased, the music on this new two-disc deluxe set from Elemental—originally recorded in pristine two-track stereo and bearing the production stamp of Shaw enthusiast Michael Cuscuna—is an interesting and exciting bit of jazz history. The group’s enthusiasm immediately shows on the opener, “You And The Night And The Music,” a standard that was new to the group’s repertoire at the time. Other memorable tracks include Shaw’s “Rahsaan’s Run,” a fierce blues full of invention; Miller’s “Eastern Joy Dance,” with its interesting melodic lines and unconventional song form; Miller’s “Pressing The Issue,” with its dramatic, darkly rhapsodic piano cadenza intro leading into a hard-driving, uptempo thrill-ride of challenging harmonic turns and impassioned soloing; and Shaw’s “The Organ Grinder,” on which the leader—who forever will be remembered as a master of technique and a wellspring of endless chops—reveals his ability to use tonal nuance, lyricism and finesse to make a powerful emotional statement.

Shaw’s son, Woody Shaw III, curated Live In Bremen 1983, as well as other recent releases in a series of historic recordings from Elemental that include newly discovered live performances by Shaw and other iconic bandleaders (including tenor saxophonist Dexter Gordon)—all of which are highly recommended.