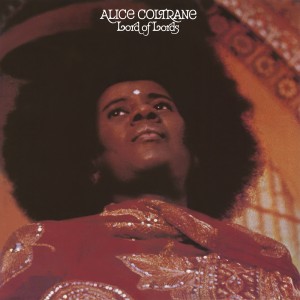 It’s unlikely that back during her days in Detroit Alice Coltrane (née McLeod) knew what was on the horizon.

Her career overlapped with jazz luminaries so frequently that any attempt to rattle off an all-encompassing list would fall flat. And her personal, musical and spiritual connection to her husband, John Coltrane, resulted in not just an impressive progeny still holding sway over the jazz world, but recorded collaborations that continue to garner admiration.

Following John’s death in 1967, Alice (1937–2007) would go on to issue a decade’s worth of work that moves from harp-led spiritual jazz to organ noodling of the highest order and devotional music that gained notoriety last year with the release of World Spirituality Classics 1: The Ecstatic Music Of Alice Coltrane Turiyasangitananda (Luaka Bop).

In pursuit of better illuminating some of her lesser-known works, Superior Viaduct reissued 1971’s Universal Consciousness in 2015. Lord Of Lords, the second of three consecutive recordings the bandleader would put together with a string section, finds Coltrane in a grandiose mode, hedging toward full-on orchestral maneuvers.

Opening with the descending melody of “Andromeda’s Suffering,” Coltrane weaves 25 stringed instruments in and out of jazz passages rendered here with bassist Charlie Haden and drummer Ben Riley. The seamless virtuosity of her compositions, conducting and performances across Lord Of Lords and its pair of related albums is only more astounding when contrasted with the ensemble work Coltrane recently had concluded with Pharaoh Sanders on albums like Journey In Satchidananda.

The luminous spirituality each track’s imbued with on Lord Of Lords might be overwhelming to the uninitiated. But hearing Coltrane make use of such a broad palette of sound, even before subsequently leaning heavily on synthesizer (though she makes prominent use of the instrument on “Excerpts From The Firebird”), illustrates that her writing truly was a boundless wonder.