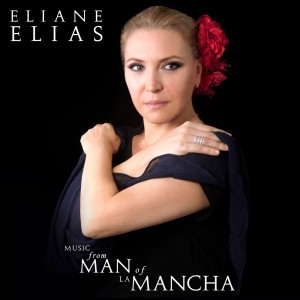 The origin story of this instrumental album is intriguing, but not as compelling as the music itself. Mitch Leigh (1928-2014), the Tony-winning composer of the music for the 1964 stage production Man of La Mancha, approached Elias in the mid-1990s and asked her to write and record new arrangements of songs that were included on the original cast recording. Thrilled at the invitation, the Brazilian pianist selected nine compositions and assembled two top-notch piano trios: one with bassist Eddie Gomez and drummer Jack DeJohnette, and one with bassist Marc Johnson and drummer Satoshi Takeishi. (Percussionist Manolo Badrena appears on eight of the nine tracks.)

Elias and her collaborators recorded this material in 1995, but due to contractual obstacles, it was never released. Now, with the blessing of the Leigh family, this gem finally is available. One need not have any familiarity with the stage or film versions of Man of La Mancha to enjoy this excellent album, which is filled with hummable melodies and Elias’ impressive, right-hand improv flourishes. Deftly avoiding sentimentality and cliché, the pianist has crafted a compelling samba arrangement of “The Impossible Dream” (one of the show’s most often-interpreted tunes). Elias utilized the Brazilian rhythm of frevo in her arrangement of “A Little Gossip,” which is spiced with an agile solo by Johnson. “I’m Only Thinking Of Him,” which features Gomez and DeJohnette, feels completely fresh in 2018.

It took a long time for this album to arrive in the marketplace, but Elias’ fans will certainly rejoice that it did.