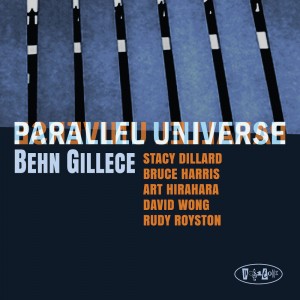 With Parallel Universe, Behn Gillece strives to show that a duality of introversion and extroversion—a fluctuating need for innovative musical technique, as well as public performance—exists in every artist. The sheer contrast of Gillece’s meticulous post-bop songwriting and the approachable, mellower, sonic quality of his vibraphone, epitomize the philosophy.

Swift rolls of vibraphone notes about midway through the title track create bold melodic ostinatos. However, the rhythmic movement isn’t like that of broad and heavy tidal waves. Rather, Gillece highlights the brighter timbre of the vibraphone within bop’s affinity for quick-step tempos. Similarly, on “Eviscerate,” Gillece refuses to force the vibraphone to be something it isn’t. The tonal difference is obvious, as he alternates between solitary performance and bolstering Stacy Dillard’s tenor saxophone, the song’s primary melodic messenger. Still, the composition unfolds like a battle of differing musical strategies—one agile and punctuated, the other expansive and malleable—more so than a hierarchy of instrumental power. Ultimately, Parallel Universe is a compositionally fascinating collection, displaying how a single set of opposites translates to a varied artistic display.