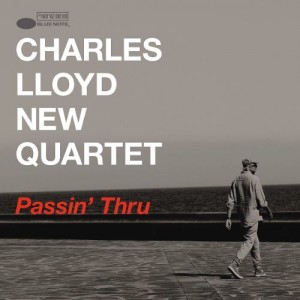 Live jazz albums historically have been about magnifying intimacy: On famous club recordings, one can feel the bodies listening, spreading a frisson throughout the room. A good portion of Charles Lloyd’s albums have been recorded live, but they don’t work exactly like that. He thrives in large halls or outdoors, where sound has room to dart and float toward an escape. And while he’s far from the only preeminent jazz musician to record at festivals, Lloyd has developed his own small canon of these recordings.

With Passin’ Thru—recorded live at the Montreux Jazz Festival and at a theater in Santa Fe, New Mexico—the reedist celebrates 10 years with his illustrious New Quartet, featuring pianist Jason Moran, bassist Reuben Rogers and drummer Eric Harland. Since 2007, this band has reanimated the approach that Lloyd first developed with his original quartet in the 1960s (with Keith Jarrett, Cecil McBee and Jack DeJohnette). Like that band, the New Quartet’s music is a reminder that post-Coltrane jazz can chase both transcendence and a kind of shapely beauty at the same time.

Lovely, plainspoken melody guides many of these seven original compositions, particularly “Tagore On The Delta,” featuring Lloyd’s wondrous alto flute work; the classic “Dream Weaver”; and the ballad “How Can I Tell You.” In his solos, Lloyd raises the group into a higher groove through consonance, not skronk. In support, the rhythm section builds each song to a point of purgation; at the top of the climb, Lloyd often pushes through with accord and warmth, lifting things with a soaring declaration.