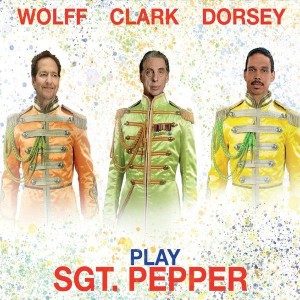 Long regarded as canonical, The Beatles’ 1967 album Sgt. Pepper’s Lonely Hearts Club Band has inspired an array of tributes, including a 2018 jazz collection from Impulse titled A Day In The Life: Impressions Of Pepper, as well as album-length interpretations by Cheap Trick (2009), The Flaming Lips (2014) and Django Bates (2017).

So, is there still interpretive gold to be mined from the 13 songs on the Fab Four’s most famous disc? Pianist Michael Wolff, drummer Mike Clark and bassist Leon Lee Dorsey prove that there is with Play Sgt. Pepper. While some of their predecessors nodded to the complex sonic tapestry that George Martin stitched together on the original album, Wolff, Clark and Dorsey scale things down, utilizing a less-is-more recipe: three musicians, eight cherry-picked songs and zero glossy production touches. The result is a master class in recasting classic pop tunes in a straightahead, piano-trio setting.

The title track and “With A Little Help From My Friends” are injected with swing, while “Lucy In The Sky With Diamonds” opens with Wolff delivering a straightforward reading of the iconic tune’s melody. The latter arrangement zigs at junctures when one would expect it to zag. Throughout the 39-minute program, the trio succeeds in making the source material easily recognizable while still expressing an adventurousness that prevents the proceedings from feeling overly reverential.

The combination of Clark’s elegant brushwork and the flurry of cascading notes in Wolff’s muscular solo transform “She’s Leaving Home” into a jazz gem. Elsewhere, a swing treatment—fueled by vibrant pianism and spiced with Dorsey’s bass solo—converts “Lovely Rita” into a fun ride that eschews the singsong quality of the original tune. A somber mood permeates the closer, “When I’m Sixty-Four,” shifting Paul McCartney’s ditty away from its jaunty roots.

With a clear command of The Beatles’ harmonic language, Wolff, Clark and Dorsey use their own distinct dialects and instrumental acumen to offer a stellar program that could win over jazz fans who refuse to worship at the Sgt. Pepper altar.