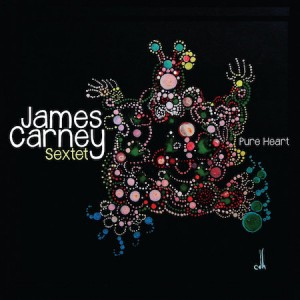 Composition and orchestration have long been recognized as essential skills in the art of making music, but what about personnel management? Getting the right players for a project can make all the difference, whether on the stage or in the studio, yet somehow “how to hire a band” remains absent from some conservatory curricula.

Should a school decide to establish such a course, I strongly would recommend hiring James Carney to teach it, if only on the basis of Pure Heart. On five tracks, the Brooklyn-based pianist offers music of astonishing complexity, both in terms of composed counterpoint and improvisational interplay. Listening to how perfectly the parts fit together and feed off one another, the metaphor of a watchwork comes to mind, with its intricate balance of cogs and gears. This is the sort of sound that typically takes months of rehearsing and touring to perfect—not something that simply can be thrown together with strangers in the studio.

And yet, that’s pretty much what Carney did. Although tenor saxophonist Ravi Coltrane appeared on Carney’s first album, 1994’s Fables From The Aqueduct, none of the others had played with Carney before—or, for that matter, with each other. Just listen to the effortless precision with which they dispatch the slow build of “Inharmonicity,” where the horns enter gradually and individually over a knotty, polyrhythmic pulse before slotting into a tangy ensemble section. If that doesn’t suggest long hours spent playing together, then certainly the interlocking, conversational lines of the subsequent group improvisation does. How else to explain the way Stephanie Richards’ trumpet works so perfectly against Oscar Noriega’s bass clarinet, or how Coltrane’s tenor so frequently locks in with Tom Rainey’s drumming?

There’s more, of course. On “Mayor Of Marceluus,” the sinuously serpentine melody and 31-bar form is effortlessly anchored by a linkage between Dezron Douglas’ bass, Rainey’s right foot, and Carney’s left hand. There’s the harmonic lushness of “Forty Year Friend,” on which the ensemble writing sounds like a small big band, and Noriega and Richards manage an almost telepathic degree of interplay while improvising. There is, to be honest, more spark, wit and passion in the playing than strangers ought ever to be able to manage, and for that Carney deserves a critics poll category of his own: Best Blend of Players for a Studio Project.