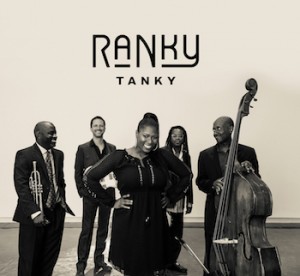 Ranky Tanky is a South Carolina-based, roots-music quintet that draws upon Gullah culture, a heritage that is found in other Southern states, too, including North Carolina, Georgia and Florida. In the album’s liner notes, Herb Frazier writes: “Gullah people from the Sea Islands of South Carolina are the descendants of Africans captured along Africa’s rice coast [in West Africa]. In the so-called new world, the enslaved toiled under the hot Carolina sun along the Atlantic coast. From this bondage came Gullah, a mixture of African and English styles.” Ranky Tanky mixes elements of African music with American gospel and r&b on its excellent self-titled disc, which includes 13 traditional songs, each arranged by the band. Lead singer Quiana Parler is a powerhouse presence, and trumpeter Charlton Singleton is amazingly adept at crafting lines that complement the singer’s timbre. A good example is “O Death,” on which the trumpeter’s lament is akin to a vocal delivery. On “Turtle Dove,” electric guitarist Clay Ross plays in a style that seems to draw a connection to West African music of the 20th century. Rounding out the band are bassist Kevin Hamilton and drummer Quentin E. Baxter, who excel at any tempo. Whether Ranky Tanky is unleashing a high-energy dance number or carefully sculpting a lullaby, such as “Go To Sleep,” the music always feels fresh. This band can take tunes from yesterday and make them sound as lively and relevant as 21st-century electronic beats.