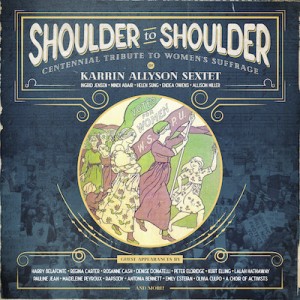 The women’s suffrage movement came to a head 100 years ago with the ratification of the 19th Amendment on Aug. 18, 1920. In the years leading up to that landmark expansion of voting rights, even before the rise of commercial radio, propagandistic anthems played a big role in the campaign.

With Shoulder To Shoulder: Centennial Tribute To Women’s Suffrage, vocalist Karrin Allyson—a straightahead singer of indisputable chops, who has been blending the flavors of blues and camp since the late 1980s—explores those century-old songs with an expert sextet. John Daversa arranged the antique songs, and he augments Allyson’s band throughout with a string quartet. A roll call of stars, from Harry Belafonte to Lalah Hathaway and Veronica Swift, handle guest vocals, singing and also reading political speeches by historical figures.

The album closes with two Allyson originals, including “Big Discount,” on which she and the emcee Rapsody attack the gender pay gap. It’s an acknowledgment that the struggle continues apace, and it nudges this album into conversation with guitarist Marc Ribot’s Songs Of Resistance 1942–2018, a collection of reworked folk songs and labor anthems, as well as new material. But that was a gnarly, more blatantly aggrieved album.

The music on Shoulder To Shoulder remains caught between the scriptedness of musical theater and the small-scale staginess of cabaret; there’s limited space for Allyson or her bandmates to dig in and fly off the hinges.

Hardly anything spills over here—not the energy of the band, and only rarely the past into the present—and the historical material feels stuck in a display case.

CORRECTION: Due to an error in the editing process, a previous version of this article inaccurately described the role of commercial radio in the suffragist movement. Commercial radio did not come about until the 1920s; suffragist propaganda anthems were not largely circulated on that medium.