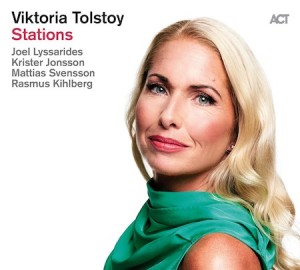 This low-key slice of adult-contemporary pop marks Sweden-born vocalist Viktoria Tolstoy’s quarter century of releasing albums, and she’s amassed a set list largely unfamiliar to American audiences. The quartet here is present mostly to support Tolstoy and fill in a few spots here and there. For the first few tracks, the solos are in short supply, but bassist Mattias Svensson gets to have a little fun on “Land Of The Humble,” a slow-paced smear of late-’90s confessional coffeehouse pop. “Million Miles” is a simmering Bob Dylan cover from Time Out Of Mind, his 1997 comeback album, but drummer Rasmus Kihlberg clings to his brushes for more than half of the record, putting them aside midway through “The Old Country.” The tune is the most straightforward swinger and guitarist Krister Jonsson gets a bit of wiggle room to strike some more forceful strings ahead of Kihlberg’s splashy cymbals. Pianist Joel Lyssarides gets in a few sprints, too, the band locking in on a Blakey-esque vibe. “The Great City,” a rarely tackled mid-’30s Tin Pan Alley effort, benefits greatly from the guitarist’s bluesy enthusiasm, and “Poinciana,” another jazz standard you don’t hear much anymore, is a groovy straightahead performance that Tolstoy sells with her most forceful performance on the album.