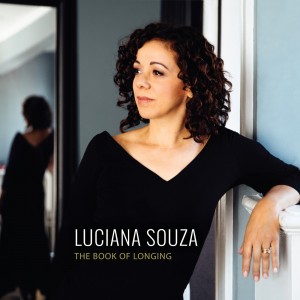 Luciana Souza is a singer who needs no adornments. She doesn’t lay on thick layers of attitude or vocal condiments; she sings frankly and tends to get the most of out of a song when using sparse accompaniment.

On The Book Of Longing, joined only by guitarist Chico Pinheiro and the ink-dark bass of Scott Colley (plus her own percussion overdubs), Souza continues exploring the soft divide between the communicable and the ineffable. It’s artistic territory she mined on her previous album, Speaking In Tongues (Sunnyside). But this time, without drums and forgoing the wordless vocalizing that defined her last effort, the focus falls hard on poetic language—its sharp power and its limitations.

Souza has put 10 poems to music: four by Leonard Cohen, whose poetry collection Book of Longing inspired the project; three of her own; and one each from three eminent poets of the past two centuries—Edna St. Vincent Millay, Emily Dickinson and Christina Rossetti. Souza’s phrasing is direct and unfussy, nearly conversational. The melodies she’s written have a warm, discursive flow, sometimes blurring the bar lines. She waxes epigrammatic on “These Things,” then romantic and wistful on “Alms.”

On this spare and pensive album, Souza sings Cohen’s poem “The Book” with gentle irony and sly harmonic shifts, à la Cole Porter. The lyrics are a solipsistic single man’s lament (“I’m living on pills/For which I thank God”). But Souza leaves melodrama at the door, and it pays: As the song’s imagery wanders toward abstraction, the feeling grows only truer.