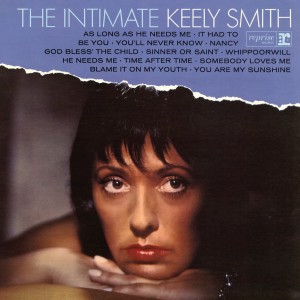 Pop–culture fans who know her name (but not her solo albums) think of Keely Smith as half of the dynamic duo she formed with vocalist/trumpeter/bandleader Louis Prima. Smith started working with Prima in 1949, and the couple wed in 1953. They became a huge draw in Las Vegas, won a Grammy for their rendition of “That Old Black Magic” and made numerous TV and film appearances. A movie poster for 1959’s Hey Boy! Hey Girl! hyped Prima & Smith as “The No. 1 Song–and–Fun Team.” The couple divorced in 1961 and, four years later, she released The Intimate Keely Smith. The Coronet label once repackaged some Prima & Smith tracks in an LP titled Sing Loud. That title conveys the exact opposite of what Smith does on this album, where she delivers a master class in singing softly, often with a breathy delivery, but never without power. The program here is centered on love and heartache, and includes the tunes “Somebody Loves Me,” “It Had To Be You,” “Sinner Or Saint” and “As Long As He Needs Me.” Smith demonstrates exemplary control of her vocal dynamics, modulating her volume for dramatic effect, and sometimes physically moving closer or farther from the microphone, just as she would in concert. The spare, tasteful accompaniment is provided by Dennis Budimer (guitar), Irv Cottler (drums), Red Mitchell (bass) and Jeff Lewis or Ernie Freeman on piano. Real Gone Music’s “Expanded Edition” marks the first time that this album has legitimately appeared on CD, and the two bonus tracks are quite different from the original 11–song program. The first bonus track is “Twin Soliloquies,” a duet with Frank Sinatra that features Nelson Riddle’s orchestration and first appeared on the LP Reprise Musical Repertory Theater Presents “South Pacific.” It’s fun to hear Keely mix it up with Sinatra, a big supporter who helped Smith release solo albums on her own label, Keely Records, in conjunction with Sinatra’s label, Reprise. The other bonus track is the pop tune “No One Ever Tells You,” which was penned by Gerry Goffin, Carole King and Phil Spector and released as the B–side of a single that Spector produced for The Crystals in 1962.